First it was at my gym (Lincoln Square) on a headband worn by a woman. I noticed the flag attached to the wall of one of the suites in the WeWork space (Loop) where my office is located. I saw it on a mug during my church’s coffee hour (Evanston). Then as a tattoo on the ankle of someone on the CTA (Brown Line).  And mostly recently, the holiday craft show at a local school. I’ve begun asking, and folks say it’s tied to their sense of civic pride.

All these sightings were north of Roosevelt, because that’s mostly where I operate. These are also predominantly white communities / spaces. In thinking about the impact of our City’s politically-created and privately-perpetuated segregation –  a “something” done, to all communities, which was /  is NOT good, and took from some, more than others… I wondered, if we folded the map, if there are fewer City flags affixed to headbands in our most marginalized communities. 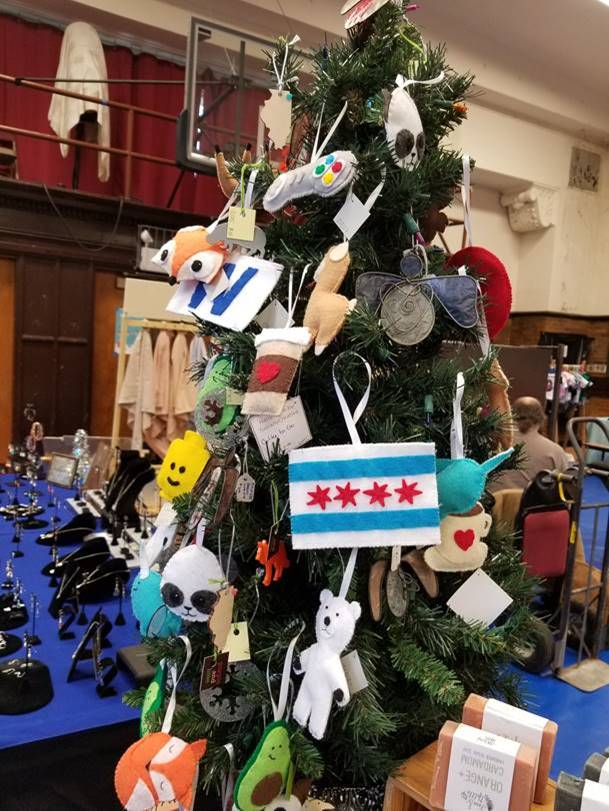 Check out Tonika Johnson’ s Folded Map Project. Johnson uses photography to visually connect residents who live at corresponding addresses on the North and South Sides of Chicago. She investigates what urban segregation looks like and how it impacts Chicago residents.

Peter Marchi and Amanda Bay write in The Chronicle-Journal (Thunder Bay, ON) “Civic pride brings a community together and makes us feel good about where we live.   Civic pride means different things to different people. It could be as simple as sweeping a sidewalk, volunteering for a local organization, discouraging litter…it’s about appreciating the existing community and the need for wanting it to improve. It’s about recognizing traditions and what makes the community unique, and working together to make it better.”

The arts increase a person’s desire to participate in improving their community.  We know that following an engagement in the arts, 63% of participants indicated that they had become more aware of—and more interested in remedying—local challenges. A recent public opinion poll conducted on behalf of Americans for the Arts revealed that 71% of the population agrees that “the arts have a social impact, improving the quality and livability of my community.”

The structure of 77CI, supported by the 2017 Point The Way report generated by a coalition of Chicago capacity building funders, shows not for profit artistic enterprises operating in divested communities of color are at a disadvantage in management capacity and infrastructure. Concurrently, the Field Foundations of Illinois’ Heat Maps showed 13% of arts organizations in Chicago received the same amount of services and funding that is dispersed among the the other 87% of arts organizations simply because they operate in divested communities on the South and West sides. By laying over our own client engagement map, A&BC saw how many arts, cultural, and creative organizations we serve in the same study area. Our Heat Maps didn’t look much different.

I think it is also interesting to observe, since 2015, Chicago’s arts vibrancy ranking, as reported by SMU DataArts, dropped from 10th to 18th.

The question for us at A&BC became,“What can we do to overturn this history and trend?”

Through 77CI, the A&BC team is seeking out art makers working and living in all of Chicago’s communities.

Over the Summer, we attended the Taste of Englewood and met Latrina Spaulding a graphic artist with Chicago Culture who designs t-shirts shouting out “Hyde Park,” “Kenwood,” “South Side.” I wanted one, but I didn’t buy one. I argued with myself that I was appropriating a community I didn’t belong to, while I simultaneously recalled a moment about a year into being the Executive Director of A&BC, when I felt my first rush of civic pride. I loved this City! And her art makers! I wanted them both to thrive. So why didn’t I buy a t-shirt that day?

77CI is as much A&BC’s vision as my own revelation that I didn’t know bupkis about 75% of Chicago’s communities.

I consider myself a native of Chicago, but I grew up in the SW suburbs, with relatives scattered between Riverdale, Cicero, Burbank, and Norwood Park East, having left the City from the Cermak (22nd Street) / Kedzie area.

My earliest memories of being in the City were attending the Houby Parade along Cermak Avenue. Houby is the Czech/Slovak word for mushrooms. Czech immigrants settled on the near West Side of Chicago’s Loop, later known as Pilsen. Many people associate the name Pilsen with today’s large Mexican American community but in fact Pilsen is named after a city in Western Bohemia in the Czech Republic. Pilsen quickly transformed into a Mexican neighborhood, and Czech’s continued to move west into Lawndale and later into the suburbs of Cicero and Berwyn.

I moved to the City in 1985 to attend DePaul and I’ve lived here ever since. Edgewater, Lincoln Park, Buck Town, Andersonville, Rogers Park, Lincoln Square. North of the fold.

This week I am spending some time in East Side and Hegewisch (95th to 140th Streets), communities I admit I didn’t know existed 18 months ago.  From my own Google search and what Sara Galván Orozco, A&BC’s intern and resident of this area, tells me there isn’t a lot of art being made in these communities. But Hegewisch does have two distinctive features according to Dan Kelly in his blog Parker Berry, Hegewisch, and the Hidden.  “First, its snazzy signs, which are more visually interesting than the average neighborhood lamppost banner. Secondly, it was once home to an interesting slice of architectural history.”

That’s what 77CI is also about – encountering our City’s history and revealing what has been obscured. For better, or worse.